Canelo: I'm Making History - Golovkin is Older and Fought Nobody! 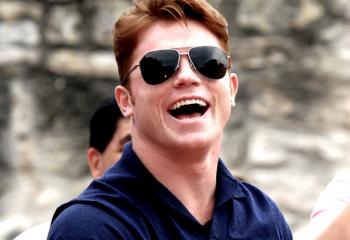 The Mexican opted out of a fight with the Kazakh KO artist and instead dropped down to light-middleweight to face WBO champion Smith. But he has no fears Brook will put a spanner in the works of a mega clash between him and
Golovkin next year.

Alvarez said: “Is Brook being sacrificed? No doubt about it.
“We all know what’s going to happen in the fight. I’m not too interested in the fight itself, but he’s going to knock Brook out.”

Alvarez held the WBC middleweight title he defended against Brit Amir Khan in May but relinquished it instead of facing Golovkin. The Mexican insists he is not running scared, instead claiming he did not want to be forced into making a deal with the Kazakh on a short timescale. He believes he is a much bigger star and with the likes of Miguel Cotto, Austin Trout and Erislandy Lara on his record, and just one defeat by Floyd Mayweather Jnr, reckons Golovkin needs to step up in class rather than facing welterweight Brook.

“Why would fighting ‘GGG’ make someone a Hall of Famer when he hasn’t fought anybody? “Everyone knows that I’m the A-side. The fight will happen when I want it to, that’s the way it is.”

ginger is scared to get KO'd
Top

Aint a goddamn thing u can do even if you change ips or im banned Pre-K..Reks L's. www.live2hustle.net/fam/
Top
Post Reply
5 posts • Page 1 of 1