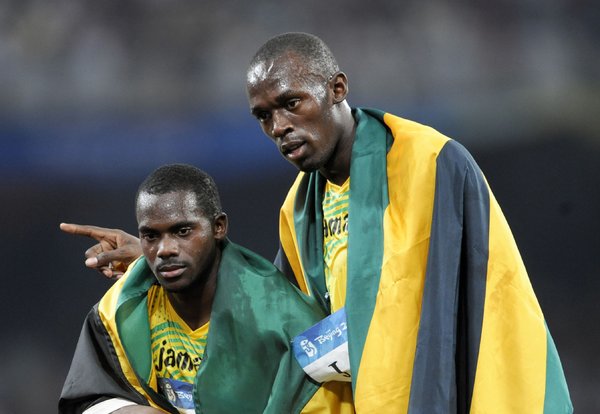 Usain Bolt is no longer a triple-triple Olympic gold medalist.

Bolt and the Jamaican team have been stripped of their 4x100-meter relay gold medal from the Beijing Games in 2008 because one runner, Nesta Carter, was found guilty of a doping violation, the International Olympic Committee said on Wednesday.

Bolt won the 100 meters, the 200 meters and the 4x100 relay at the last three Summer Olympics, for a total of nine gold medals, tied for the most of any track athlete.

Carter initially tested negative after the race in 2008. But his sample was one of many retested by the I.O.C. last year. It was found to contain a prohibited stimulant, methylhexaneamine.

Olympics officials last year intensified scrutiny of samples from past Olympics after Russia was found to have executed an elaborate, state-supported doping scheme. Dozens of athletes from the Beijing and London Games have been found, upon retesting of their stored samples, to be guilty of doping violations. Many were medalists.


It is standard practice for Olympic officials to store urine samples for up to a decade so they may conduct additional tests, often with more advanced, newly developed techniques.

Carter was also a part of the winning 4x100 relay team in London in 2012, but no announcement about the status of that medal has been made. He is a three-time world champion in the relay as well.

The I.O.C. directed the international track federation to “modify the results” of the 2008 event. Trinidad, Japan and Brazil were second, third and fourth in the race and would each move up a notch. The United States dropped the baton in its heat and did not make the final.

The I.O.C. also told the Jamaican federation to secure the return of the physical gold medals. The other two team members in the final were Asafa Powell and Michael Frater. The Jamaican team finished in 37.10, which was a world record at the time.

When one member of a team tests positive, it is typical for the entire team to be stripped of its medals, though there have been exceptions. Marion Jones lost two relay medals from 2000 after doping violations, but her teammates were allowed to keep theirs after an appeal to the Court of Arbitration for Sport.

When news of Carter’s positive test first emerged last year, Bolt told The Guardian, “It’s heartbreaking, because over the years you’ve worked hard to accumulate gold medals and work hard to be a champion – but it’s just one of those things.”

“If I need to give back my gold medal I’d have to give it back, it’s not a problem for me,” he said.

The I.O.C. also announced on Wednesday that Tatiana Lebedeva of Russia was disqualified from the 2008 long jump, in which she won the silver medal, and the triple jump because of a positive test.

Bolt, regarded as the greatest sprinter in history, has said he will retire from the sport after this summer’s world championships in London.