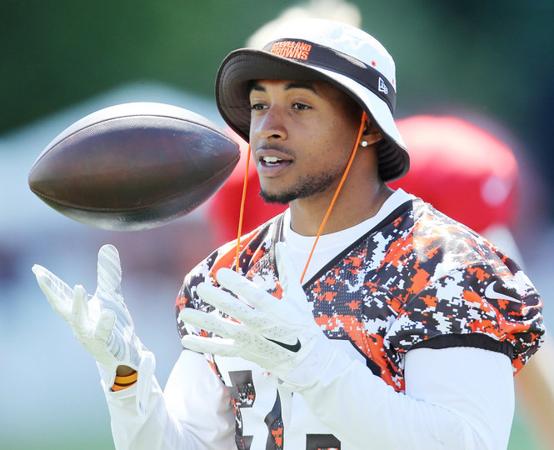 After a season spent out of football, K'Waun Williams has a new home.

Williams had fielded four contract offers, including one from the Jets, according to NJ Advance Media, but chose the Niners.

Williams burst onto the Browns' scene in 2014 as an undrafted free agent who stunned many by usurping first-round pick Justin Gilbert in the secondary, serving primarily as the team's nickel corner. His most memorable performance came during the Browns' historic, comeback win over the Titans in Tennessee in Week 5 of the 2014 season.

Less than two seasons later, things got a little hairy. Williams suffered an ankle injury during training camp prior to the 2016 season, and when offered a full workload in a preseason contest against Green Bay, Williams chose not to accept it, citing his injury as the reason. The Browns viewed this as conduct detrimental to the team and suspended him for two games (a loss of one game check).

Williams sought a second opinion on his injury, and the independent specialist from the Cleveland Clinic informed him he needed surgery to remove bone spurs. Twelve days after his suspension, Williams was released by the Browns. The corner spent the season out of football while recovering from ankle surgery and filed a grievance against the Browns, which will be heard on May 16 in Cleveland, per Cleveland.com's Mary Kay Cabot. Williams is seeking full payment of his 2016 salary, as well as reimbursement for the cost of his ankle surgery.

Now healed up and ready to play, Williams gets to return his focus to the field, where he'll join a Niners secondary that could use an effective nickel corner to join starters Jimmie Ward and Tramaine Brock. It's unknown how well Williams will rebound from the ankle operation, but it's a low-risk signing for the Niners with potential for a great reward if Williams can replicate his play from 2014 and 2015.
TTO = white privilege & 4 da record, Makin $$$ off mods (IP is everything) @ da expense of dem posting